The Becoming American Initiative helps promote the positive impact immigrants, both documented and undocumented, have on society. The current U.S. workforce includes 27.4 million immigrants. Most of these people have lived in this country for over a decade. The American economy is directly impacted by their hard work.

The Becoming American Initiative will fight to influence political leaders and change public opinion about the important role immigrants hold on society. 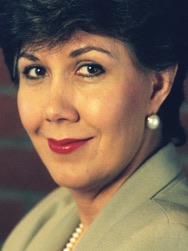 Linda Chavez is one the of chairman for the Center for Equal Opportunity, a syndicated columnist whose work appears in The Wall Street Journal, The Washington Post, The New Republic, Commentary, and Reader’s Digest, and a board member for two Fortune 500 company. She authored Out of the Barrio: Toward a New Politics of Hispanic Assimilation, discussing the timeline of Hispanic progress regarding bilingual education, voting rights, immigration, and affirmative action.

Chavez served in the Reagan administration as the Director of the Office of Public Liaison, making her the highest-ranking woman in President Reagan’s White House. In 2000, the Library of Congress named Chavez a Living Legend. Chavez received her Bachelor of Arts from the University of Colorado and her masters from George Mason University.

What Is a Good American? (Linda Chavez, Creators Syndicate)